Response Center 999 is the home of Supernumerary, a man with an eidetic memory, and Ilraen-Aroline-Fothergill, an Andalite from an Animorphs badfic. They work in the Department of Implausible Crossovers. Whenever a careless writer smashes two or more universes together for no good reason, it’s their job to untangle the worlds, put the canon characters back where they belong, and remove any original characters and other anachronisms that don’t belong anywhere at all. Between Ilraen’s inexperience and Nume’s prickly personality, they often have their work cut out for them.

Supernumerary is a veteran agent who joined up in early 2003. Before being partnered with Ilraen in 2007, he worked with Agent Cameo in the Department of Floaters. Some of their exploits are recorded in “The (Plot)Hole-ish Adventures of Cameo and Supernumerary.” However, their final mission together ended in disaster, and Cameo hasn’t been seen or heard from since. She was a bit of a psycho who liked to play with the neuralyzer a little too much, though, so she is not missed.

Nume and Ilraen are friends with Jennifer Robinson, a nurse in the Department of Fictional Psychology who has known them each for nearly their whole careers and was partly responsible for getting them assigned together. She occasionally helps them out on tricky missions. 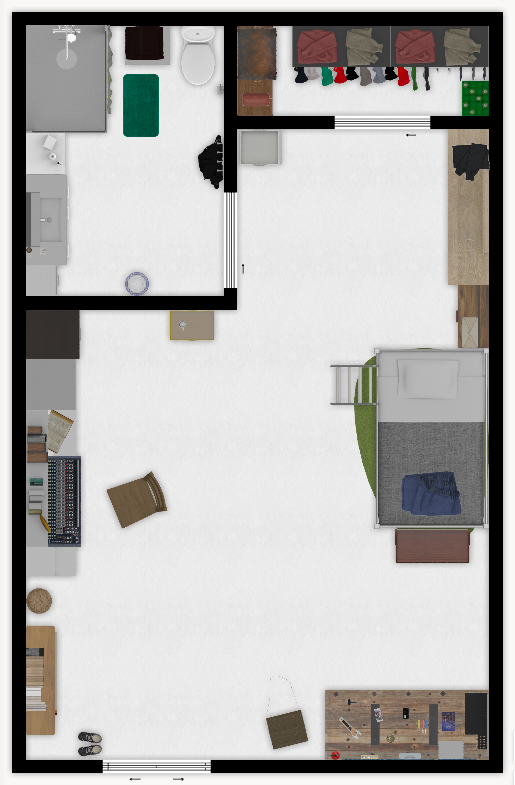 The response center itself is dorm-style with sliding Star Trek-style doors. From the main door, the living area is shaped like the state of Utah if it were flipped sideways. The shorter left wall is dominated by the console, but there is some room on the near side for bookshelves and on the far side for a mini-replicator, which is based on the larger Star Trek replicator. (Some previous inhabitants of the RC worked in the Trek Division of the DMS.) Against the longer right wall, there is a bunk bed with a spread of blueish-green grass from the Animorphs universe in the place of a bottom bunk. At the foot of the bed, there is another set of bookshelves. Against the right wall on the other side of the bed, there are even more bookshelves. Against the near wall beside the door, Ilraen has a worktable where he spends some of his free time on his hobby of reconstructing a working CAD. On the opposite side of the room, in the internal walls forming the “nook,” there are doors to the bathroom and a storage closet. Between them, against the far wall, Nume keeps his dresser.

Nume and Ilraen are both sci-fi fans, but with the Harry Potter series being crossed over with everything else in the multiverse, they tend to get a lot of missions there. Nume also particularly favors The Lord of the Rings, and thanks to Cameo, he has experience with quite a bit of anime, too. Since both agents spend lots of time reading and keeping up with popular movies and TV shows, there is very little this team can’t cover effectively. Until the subject matter starts getting a little more, ahem, adult, that is. Ilraen knows nothing about such things and Nume wants nothing to do with them, so it’s always fun when they come up.

Not part of the main spin-off, but still things that happened to the residents (and former residents) of RC 999, these events are relevant to their development, and are hopefully entertaining. They are presented in chronological in-universe order with approximate dates given in Headquarters Standard Time when possible, but note that the length of time between dates does not necessarily reflect the amount of time experienced by the characters.

“The Scourge of the Scarlet Maiden,” Part 1, Part 2
What: Nume helps Agents Logan and Entropy take out stray badfic characters in the Cafeteria when their mission goes awry. Never mind that he was running away at the time. To be fair, he was probably trying to celebrate his third anniversary of recruitment and didn’t deserve this.
When: February 2006.
Rating: PG-13/T
“Ilraen Gets Human”
What: Ilraen visits the Lounge, meets Nume for the first time, and acquires his human morph.
When: October 23, 2006; two or three weeks after “Introducing Ilraen.”
Rating: G/K - Entire team is babies.
“Operation: Neuralyze!”
What: Nume and Ilraen help neuralyze a Borg cube and round up minis after some unlucky agents get themselves assimilated.
When: December 2006; after Mission 01.
Rating: PG-13/T
“The Youngest Goddess and a PPC Emergency,” Part 1, Part 2
What: Nume and Ilraen (along with half the rest of HQ) help Agents Lunac and Liadan exorcise goddess-Sue Robecca from the Land of Narnia. Their post is the Stone Table.
When: July 2008.
Rating: PG-13/T
“The Great 2009 Genderbend”
What: Nume and Ilraen are caught up in an accidental gender-bender. Ilraen takes it much better than Nume.
When: January 31–February 1, 2009.
Rating: PG/K+
“Henry’s Birthday”
What: Nume and Ilraen attend Henry Robinson’s second birthday party in the Really Very Tiny Auditorium.
When: February 5, 2011.
Rating: G/K - Good clean fun for all audiences.
“Going Postal”
What: Nume and Ilraen each receive a package from the Postal Department.
When: September 2010.
Rating: PG/K+ - “Bright purple object of explicit nature.”
“The International Academy of Hetalia Fanfiction”
What: In chapters 71-74, Nume and Ilraen join the effort to contain the OFU’s traditional end-of-term crisis. They are awarded Knights Grand Cross of the Order of the Mochi for their service.
When: May 2011.
Rating: M
“Going Postal 2”
What: Nume receives several very amusing singing telegrams.
When: Fall 2011.
Rating: PG/K+ - Misanthropic language.
“Recovery”
What: Ilraen encounters Agent Cinderella in the Courtyard and provides a sympathetic ear.
When: March 2012.
Rating: PG-13/T
“Recruitment: Team Nevermind”
What: Earwig starts an Australian Indoor-Rules Quiddich team. Ilraen joins, despite Nume’s objections.
When: May 2012.
Rating: PG/K+
“Relocation”
What: Ilraen bumps into Cindy again in line at the Canon Library, returning a book she's looking for.
When: October 2013; after Mission 07.
Rating: PG-13/T
“PPC HQ Hunger Games: Season Two”
What: Ilraen and Nume compete in the second annual-ish PPC HQ Hunger Games and come in 24th and 4th place out of 24. Ilraen is blown up in an explosion set by Foxglove right out of the gate, and Nume is embarrassingly nibbled to death by cats squirrels.
When: January 2015.
Rating: PG-13/T
“In Memoriam”
What: Nume receives some sad news.
When: February 27, 2015.
Rating: PG/K+
“I’ll Do It”
What: Just after Mission 08, Nume has a portentous chat with the Lichen.
When: May 2015.
Rating: PG-13/T
“PPC HQ Hunger Games: Season Three”
What: Ilraen and Nume compete in the third annual-ish PPC HQ Hunger Games and come in 27th and 16th place out of 48. Ilraen is blown up again, this time in a fireball, and Nume dies of “thirst” when Derik stabs him with his own syringe of concentrated potassium chloride solution.
When: January 2016.
Rating: PG-13/T
“Neverfree From Working”
What: Nume and Ilraen help exorcise the Everfree Forest in Unicorn and Zebra form, respectively.
When: ?October? 2016. This event may have happened before June 2016 for Nume and Ilraen.
Rating: PG-13/T
“Seemed Like a Good Idea at the Time”
What: Ilraen finally finishes his CAD project. Well, almost. At least it doesn’t explode.
When: April 2016.
Rating: PG-13/T
“Morph”
What: Ilraen passes the ability to morph to Agents Charlotte Webb and Farilan, and he gets to keep his Escafil device afterward.
When: November 2017.
Rating: PG-13/T
“Ten Years Hence: Henry”
What: In the future present, Ilraen appears to be an agent trainer, Henry Robinson is ten, and life in HQ is complicated.
When: Mid-year 2019; semi-canon.
Rating: PG/K+ - Unseemly references to goats.
“Catastrophe Theory: The End Is Nigh!”
What: In an alternative future, Ilraen is known as “the Warhorse.” Repent?
When: 20??; AU.
Rating: PG-13/T - Violence.

Agent Supernumerary is in the habit of picking up odd objects that catch his eye during missions, and Ilraen occasionally follows his example. These can be seen decorating the top of the console, the walls, etc.